College of Arts and Sciences

Tuning and temperament in music from the Middle Ages to the Baroque Era is a fascinating subject. It can have an enormous effect on the sound of a musical performance but, ironically, is simultaneously complex and easy to ignore.

In recent years, it has become a “given” that performers wishing to follow principles of historical performance will employ some temperament with an historical pedigree, particularly if they are performing with a keyboard instrument such as a harpsichord. Out of curiosity, I regularly ask performers of Baroque music what temperament they are using and increasingly, to my dismay, the answer is “Vallotti” or “Vallotti/Young”. Exactly why that should cause me any dismay is the subject of this article.

It could be argued that what is needed is a full exposition of problems and solutions in using historical temperaments, not a specialized study. I have chosen to focus on what I perceive to be a current problem, however, hoping that the explanations will give readers an understanding of the basic issues along with the specifics of this topic. Words that are highlighted have pop–up definitions available, so help should be only a click away. Some basic explanation is needed first anyway.

Notes that are higher in pitch vibrate faster than lower notes, and the ratio between those vibrations determines the interval between the notes. Thus, a note vibrating twice as fast as another will sound an octave higher. Without the technology to measure vibrations, even medieval theorists noticed that this pitch relationship applies to string lengths as well: a string half as long as another of the same material and tension sounds an octave higher. We therefore say that the ratio of the octave is 2:1. This is the simplest, least problemmatic interval, and the easiest to tune as well.

When notes are perfectly in tune with one another according to the harmonic series (the overtones of a musical sound that are present in varying strengths and help to determine its tone color), the interval produced is clean and stable. When the notes are close but not in perfect agreement, there is interference between the respective harmonic series of the two sounds, and that creates a noticeable “beat” or wavering of the interval, most prominently at the lowest conjunction or shared harmonic in both series. (The octave is the easiest interval to tune because its beats are so easy to hear and match to the notes of the interval: the higher note itself belongs to the harmonic series of the lower note so the beats are in unison with the higher note.) The more out of tune the notes are, the faster the beat. As the beats get slower and the sound suddenly becomes tranquil, it is clear that the notes are in tune. Other intervals have beats that are more difficult to relate to the pitches of the interval, so those are harder to tune. But all intervals with notes in some kind of harmonic relationship to one another create beats unless the interval is acoustically pure, or else so far out of tune that we can’t perceive the beats.

After the octave, the next simple interval is the fifth. Its ratio is 3:2, which means that a fifth is created when one note is vibrating 1 1/2 times as fast as the other (or with string lengths in a 3:2 proportion). Fifths occur in every triad and therefore in most harmonies from the period in question. It would be nice to be able to use acoustically pure, beatless fifths in performance, but it’s not that simple. The problem is that tuning a series (commonly though in this case inaccurately called a “circle”) of pure fifths, say, up from C to G to D and so on, eventually, you’d expect to arrive back at C again. Unfortunately, when you expect to be arriving back on C with the twelfth fifth in the series, the note you tune with that last pure fifth is actually quite a bit higher than the original C or any octave multiple of it. That difference–about 1/4 of a semitone–is something we call the Ditonic comma or, perhaps more familiarly, the Pythagorean comma in deference to the Greek theorist’s “discovery” of the harmonic series and the 3:2 proportion of the fifth.

Thus, pure fifths, which would seem to be desirable, are incompatible with our twelve–note octave. The solution generally used today is to narrow (temper) the fifths by a tiny amount–1/12 of the Pythagorean comma or about 1/50 of a semitone–so that the comma discrepancy is spread out over the whole series and the fifths really do make a circle. Thus, the C of arrival is in tune with the original one. A byproduct of this system is that all of the semitones in the octave are equal, but the name Equal Temperament (ET) actually comes from the uniform narrowing of all of the fifths. The virtue of ET is that it can be used in any key from C to C# or Cb major with no change in the quality of the chords and no limitation on the use of enharmonic notes like G# and Ab. There is a price to pay, however.

After the fifth (3:2) and its partner the fourth (4:3)–like Ginger Rogers, doing everything the fifth does only backwards (I don’t know about the high heels)–the next harmonic interval of critical importance is the major third (5:4). In the harmonic series, the major third is a much narrower interval than we’re used to, but its beatless, tranquil quality can be appreciated after a few hearings. Unfortunately, the pure major third (PM3rd) cannot be easily reconciled to a twelve–note octave either: tuning a series of PM3rds up from C (C—E, E—G#, G#—C) produces an octave that is excruciatingly narrow. Neither can the PM3rd and the pure fifth be reconciled in a twelve–note octave. Tuning four pure fifths in series (C—G, G—D, D—A, A—E) produces a C—E third that is much wider than an acoustically pure third, a discrepancy known as the syntonic comma. Only by tempering each of the intervening fifths by 1/4 of the syntonic comma can the resultant third be made pure. Systematically tempering the fifths by this amount is a solution–quarter–comma meantone–that most Renaissance musicians chose, preferring the sweetness of its eight PM3rds, even though the fifths are almost 2 1/2 times narrower and more dissonant than fifths in ET. This is the cost of a system that favors PM3rds:

On the other hand, the cost of the flexible, universally usable system of ET is M3rds that are all equally bad. Quarter–comma fifths are just that: 1/4 of a syntonic comma narrower than pure fifths. ET M3rds, however, are 2/3 of a syntonic comma wider than pure! It’s a heavy price to pay for utility, and even though some theorists discussed ET at least from the early 17th century, most musicians elected not to use it, largely because the thirds were so awful and because it was so difficult to tune by ear.

So what tuning system did Baroque musicians use?

Footnotes
(Back to Main Text Body) 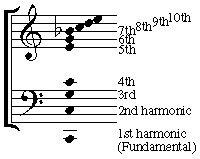